Address Resolution Protocol (ARP): Everything You Should Know About

If you're like most people, you take the convenience of the internet for granted. You probably don't think about how the addresses used to route your packets to their destinations are resolved. In this blog post, we'll take a closer look at address resolution protocol (ARP), what it is, and how it works. We'll also discuss some of the security implications of ARP and ways to protect yourself against them. Stay tuned!

ARP (Address Resolution Protocol) is a communication protocol used for mapping a 32-bit IPv4 address to a 48-bit MAC address or the other way around. It is used on Ethernet and WiFi networks, and it is also supported by many other network types. It is a crucial part of how IP address works and is responsible for resolving address conflicts and maintaining address tables.

When two devices in a network need to communicate, they first use ARP to resolve each other's address. Address resolution protocol is a part of the TCP/IP stack, and it is used by almost all modern networking devices. By understanding how it works, you can troubleshoot many networking problems.

How Does ARP Work?

The Address Resolution Protocol (ARP) is fundamental to Internet communication. It is used to map a network address, such as an IP address, to a physical device like a NIC. This mapping is necessary because data packets can only be sent to physical devices using their MAC address. It complements the IP protocol by providing a way to determine the MAC address of a remote device when all that is known is its IP address.

When a device wants to send a packet to another device on the same network, it first looks up the destination IP address in its ARP table. An ARP table is a data structure used by network devices to store information about the mapping of IP addresses to physical MAC addresses. ARP works by sending out a broadcast message (ARP request) that contains the IP address of the target device. 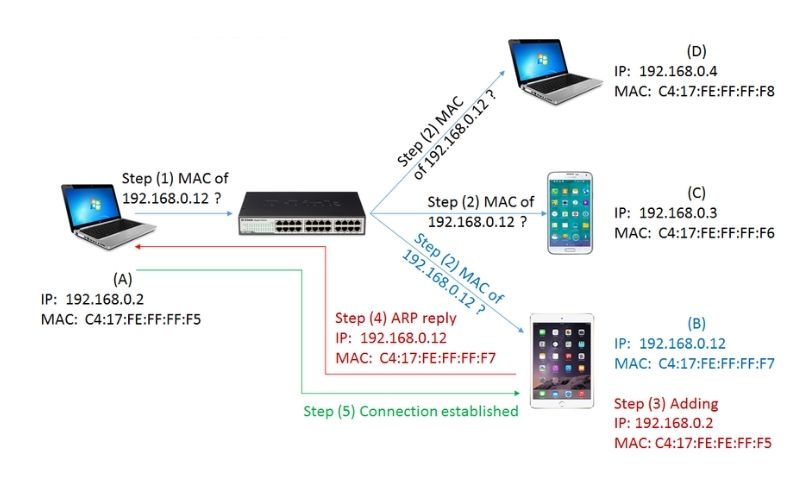 An ARP request is a type of packet that is used to request the Media Access Control (MAC) address of a specific computer on a local area network (LAN). The request is sent to all computers on the LAN, and the computer with the matching MAC address responds with an ARP reply packet.

All devices on the network will receive this message and compare the IP address to their own. The device with the matching IP address will respond with its MAC address, which will be added to the sender's ARP cache. Now, whenever the sender needs to communicate with the target device, it can look up its MAC address in the cache and send data directly to it.

This process happens automatically and is transparent to users. Thanks to this protocol, we are able to communicate seamlessly with devices on our local network without having to worry about their MAC addresses.

For further information, you can read this ARP configuration guide by Cisco.

Address Resolution Protocol (ARP) is a powerful tool that can be used for both legitimate and malicious purposes. When used correctly, it can help improve network performance and stability. However, it can also be exploited to execute denial-of-service attacks, insert false entries into the ARP cache, and sniff network traffic. As a result, it is essential to be aware of the potential security implications of the protocol before using it on a network. By understanding the risks associated with ARP, administrators can take steps to mitigate them and protect their networks.

A denial-of-service attack occurs when an attacker sends a large number of false ARP messages to a target device. This flooding of the ARP cache causes the target to become overloaded and unable to process legitimate traffic. As a result, the target is effectively cut off from the network. While denial-of-service attacks are generally challenging to carry out, they can be devastating in terms of their impact. The good news is that there are a number of steps you can take to protect yourself from this type of attack.

Spoofing allows the attacker to redirect traffic or perform other man-in-the-middle attacks. It is relatively easy to carry out and can be difficult to detect. As a result, it is a serious threat to network security. To protect against spoofing attacks, organizations should implement security measures such as port security and MAC (Media Access Control) filtering. In addition, users should be aware of the risks posed by spoofing and take steps to protect their own devices from attack. By understanding and mitigating the risks posed by spoofing, organizations can help to ensure the security of their networks.

A man-in-the-middle attack occurs when an attacker intercepts traffic between two victims and impersonates both victims to each other. The attacker can then read, alter, or even inject data into the communication. One way to protect yourself from man-in-the-middle attacks is to use a VPN, which encrypts your traffic and makes it more difficult for attackers to sniff or tamper with your data.

You can also use a firewall to filter traffic and prevent unwanted ARP requests from reaching your computer. Finally, make sure that you have the latest security patches installed on your system to close any potential vulnerabilities that attackers could exploit. By taking these precautions, you can help to keep your data safe from man-in-the-middle attacks.

ARP is an important aspect of networking that you should be aware of.

You can troubleshoot networking issues, optimize your network performance, and protect yourself from several attacks by understanding how it works.

Start today and check out our IT courses about ARP and more... 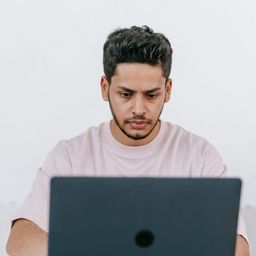