What is Deadlock situation in MPLS Traffic Engineering ? 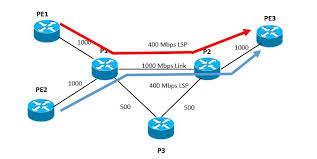 RSVP doesn’t take actual link utilization in the dataplane. Which means, if you send 600Mbps traffic over 400Mbps signaled LSP, traffic is not dropped. If there is no utilization on the physical link, you wouldn’t see any problem. Control and data plane is not synchronized by default in MPLS Traffic Engineering deployment with RSVP signaling.

On the above figure, let’s say actual traffic utilization reaches to the 800 Mbps on the Red LSP. And usage on Blue LSP is still 400 Mbps.  Two of these LSPs combine, 1200Mbps traffic is sent down over 1000Mbps link.

Thus , the traffic over both of the LSPs will be affected. So, RED LSP’s traffic increase, affects Blue LSP as well.   In distributed Traffic Engineering, two futures are used to avoid deadlock problem.   LSP priorities and the Auto Bandwidth.

With Auto Bandwidth, routers check the actual interface usage, so the data plane traffic and adjust the RSVP control plane accordingly. So, LSP is resized. But without priority, even when resizing the Red LSP to 800 Mbps, Blue LSP is not moved to the bottom path.

Both priority and Auto bandwidth would work in this topology. But what if Blue LSP’s priority is better and it tries to force Red LSP to move to an alternate link. So solution gets very complex.