BGP Confederation is specified in RFC 5065, which describes the use of Autonomous System Confederations for BGP - Border Gateway Protocol.

This topic and many other simple and advanced BGP topics are covered in Orhan Ergun's BGP In-Depth course from a design and hands-on perspective.

There are generally two design methods when considering BGP confederations.

2. Different IGP in the sub-AS

There are pros and cons of each method as usual. Implementing the BGP confederation significantly reduces the total number of BGP sessions.

Implementing BGP confederations involves quite a change to BGP configurations and the architecture itself, adding more complexity to achieve a stable and scalable BGP design.

Migrating a network to a BGP confederation will be disruptive. Routers that are part of a sub-AS will need to change their BGP configuration to use the sub-AS instead of the real AS numbers. 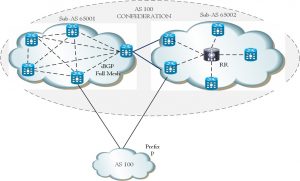 BGP routers within a sub-AS peering are IBGP peers., BGP routers in different sub-AS are EBGP peers which means that the AS number is prepended when an update travels between the sub-AS.

If a router has to send an update towards its IBGP neighbor within a sub-AS, it will not change the AS_PATH attribute. BGP between the sub-ASs is called as intra-confederation EBGP

EBGP routes that are exchanged between the sub-ASs are also known as confederation external routes, which are preferred over IBGP routes when it comes to best path selection.

If BGP has to choose between two paths to the same destination, one path leading inside the sub-AS, and another outside the sub-AS but within confederation, it will choose the external path – towards the neighboring sub-AS.

Implementing BGP confederations involves quite a change to BGP configurations and the architecture itself, adding more complexity to achieve a stable and scalable BGP design.

Migrating a network from full-mesh IBGP or Route-Reflection to a BGP confederation will be disruptive because Routers that are part of a sub-AS will need to change their BGP configuration to use the sub-AS instead of the real AS numbers.

To create Intra Confederation EBGP peering with the other sub-ASes, use the following command in router configuration mode:

Although this comparison requires a separate blog post, in this post very briefly let's discuss the differences. Both BGP design option is done for BGP Scaling. But the main difference is BGP Confederation is usually preferred in Merger and Acquisition scenarios. BGP Route Reflection in IBGP networks is the most common deployment model and in most cases, it is the preferred option when BGP Scalability is the requirement.