I am explaining this topic in deep detail in my CCIE Enterprise Infrastructure Training and also my specialized BGP Zero to Hero course.

What is BGP Route Reflector?

A BGP route reflector (RR) is a network routing component for BGP. (RFC 4456). It offers an alternative to the logical full-mesh requirement of the internal border gateway protocol (IBGP).

Above is the Wikipedia definition of a BGP Route Reflector. Let's extend the definition a bit.

BGP Route Reflector is only used in IBGP.

There are two BGP methods. EBGP and IBGP.

BGP Route Reflector as I said above, is only used in IBGP. Route Reflector is not a special device, it is a regular router, which can run any routing protocol, it can be a physical or virtual router that needs to have BGP code, that's all.

BGP Route Reflector is an alternative to BGP full mesh. What does it mean?

The requirement with IBGP, every BGP router needs to have a BGP neighborship with all the other BGP routers in one particular BGP Autonomous System. 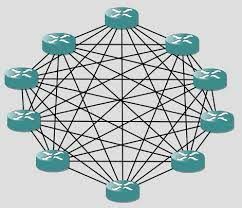 The above topology shows IBGP Full Mesh design. As you can see, from each router, there is a BGP connection to each and every other BGP router inside the network. 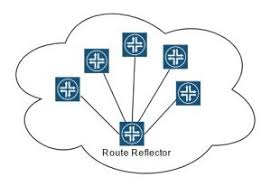 As you can see in the above topology, BGP Route Reflector is a central node which all the other BGP routers in the network build an IBGP neighborship with.

Between figure -1 and figure -2, did you realize something?

Why BGP Route Reflector is used?

Almost every Service Provider today uses BGP Route Reflector. As you might know, because of my job, I work with probably more than a hundred operators. Very few of them use alternate methods which I will mention throughout the post.

For those who deploy BGP Route Reflector in their network, the main reason is scaling. When you don't need to have an IBGP neighbor to each and every BGP router in the network, you have less amount of BGP sessions in the network which means less connection to troubleshoot and maintain.

Configuration on the devices is reduced greatly too.

In figure 2, each RR client only has one BGP session. Without BGP Route Reflector in that topology, as there are 6 routers, each router would have 5 IBGP sessions.

What is the alternate method for BGP Route Reflector?

Many people believe that BGP Confederation is an alternate method for BGP Route Reflector. In fact not exactly.

Although I don't want to cover the BGP Confederation in this post as it requires a separate detailed post, you need to understand the very basic idea with it.

Let's look at the below topology. 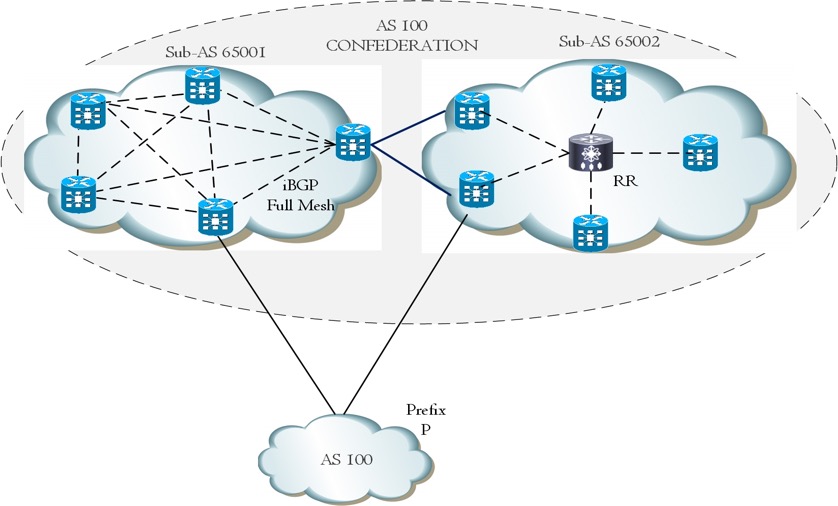 With BGP Confederation, BGP topology is divided into smaller parts. Each part is called a Sub-autonomous system.

‘ Inside each sub-autonomous system, since IBGP is setup between the routers, either full-mesh BGP connections or BGP Route Reflector is required ‘

Many applications and many services run on today's networks. IP and MPLS are the most common services in the Enterprise and Service Provider networks.

There are different design requirements for the IP RR and the VPN RR. I will mention them in the BGP Route Reflector Problems section of this article.

The main benefit of the BGP Route Reflector is Network Scalability.

BGP RR simplifies the configuration of the BGP routers.

But, there is one more thing which I will explain with the below topology.

Route Reflector hides the available paths. This is a benefit for some networks, the problem with others. I will explain how it is good and bad at the same time. 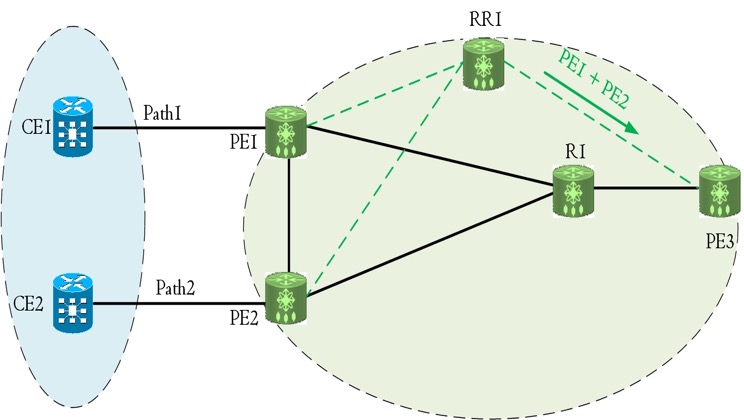 In Figure-4, the Customer site is connected to two different PE devices in the operator network.

BGP Route Reflector, both in IP and MPLS environment, selects only one path for the destination, installs only this path in the routing table, and advertises this path to Route Reflector Clients.

This means, in Figure-4, even though Route-Reflector learns both path/next hop (PE1 and PE2) for the customer site, Route-Reflector Selects either PE1 or PE2 as the best path and advertises it to PE3.

PE3 only receives one path for all the customer site prefixes. This is Route-Reflector benefit from a device resource usage point of view. If PE3 would receive both PE1 and PE2 as the next hop, it would have more routes in the routing table, thus memory and CPU usage would increase.

Having only one path for the destinations on the PE3 has disadvantages as well which I will explain in the BGP Route Reflector Problems section in this post.

Note: In Figure-4, Unique RD per PE per VRF technique is used to advertise both PE1 and PE2 from BGP Route Reflector to PE3. But this is not the topic of this post.

Problems with the BGP Route Reflector

In the above example (Figure 4), PE3 had only one path for the customer site prefixes as BGP Route Reflector advertises its best path only.

What if the customer wants to use both of the links in an active-active manner. If BGP Route Reflector always chooses PE1 let's say as the best path, the PE2 link would be always idle.

But how PE3 can receive both of the available next hops/paths for the customer site prefixes while BGP Route Reflectors are in place?

There are multiple techniques such as BGP Add-Path, BGP Shadow Sessions, and BGP Shadow RRs but the best one for the MPLS networks is using Unique RD per PE per VRF/VPN. I promised to keep this post simple thus I won't start explaining all of them.

If available paths are hidden, and Route Reflector is sending only the best path to the RR Clients, can it create a sub-optimal routing problem?

Yes, it does. Let's look at the below topology. 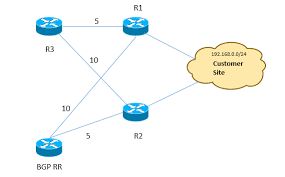 From R3's point of view, R1 is the best path, because R1 has a smaller IGP cost than R2, for this customer network.

But R3 will not receive R1 as an available next hop for this customer site, because BGP RR will not send R1 as a next-hop to R3.

Remember, what was the RR rule? RR will select only one best path for a given destination and advertise it to the RR Clients.

From R3's point of view, using R2 is sending traffic to the suboptimal path.

BGP Route Reflector prevents fast reroute. For the fast reroute, at least two path needs to be installed on the device which will take an action. In Figure-5, If R3 would receive both R1 and R2 as next-hops for the customer site, R3 would be able to install, R1 into the routing table as the primary path and R2 as the hot-standby path.

I explained the BGP Fast Reroute detail earlier on the website thus I recommend BGP PIC (BGP FRR) article if you want to understand this section more.

Without BGP Route Reflector, we would have Full Mesh IBGP. Every BGP Router would have a direct IBGP session with each other.

They would have all available next-hop/exit points for the prefixes.

Just look at the above, Figure-5 topology.

Without BGP RR, R3 would have an IBGP session with both R1 and R2.

R3 would install R1 as the best path into the routing table due to lower IGP cost. (IGP cost would be a tie-breaker in the best path selection process)

In case of R1 failure, R3 would be notified and start installing R2 as the best path.

When Route Reflector is deployed, in case of R2 failure in the Figure-5 topology, BGP RR would declare that R2 is no longer the best path for this customer site, then RR would choose R1 as the best path after finishing its BGP Best Path Selection process, would wait for the MRAI (Minimum Route Advertisement Interval) and send the new best path to R3. When R3 receives the new best path, it would spend time installing the prefixes with next-hop to the IP Routing and Forwarding Table.

As you can see, BGP Route Reflector increases convergence time!

More than one RR is important. And as a general design rule I always recommend you to have two, right? Not three, four.

What was the motto? Two is the company, three is crowded.

As I mentioned above in the article, There might be different services in the network. Internet, VPNs, etc.

But should you use the same router for both IP and VPN RR functionalities?

The answer is it depends. If the deployment is small enough, yes you can. But always consider the impact of having problems in one service to another. If there is an attack on IP RR, it will affect VPN customers as well. This concept is called fate-sharing.