I explain couple other main reasons of MPLS Traffic Engineering in this post, but just remember that, Maximizing the capacity usage of our networks is primary technical goal. Bin Packing problem is just the opposite.

Although the purpose of MPLS Traffic Engineering is to maximize the usage by sending the traffic to the all possible paths optimally, as you will see from the below example, this is not always the case unfortunately. 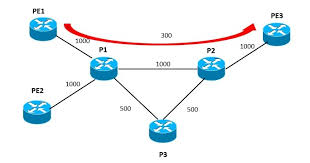 Bottom path haven’t been used yet, thus bottom path has 500 Mbps capacity. So far, so good, no problem ! But, PE2 will not stay there without any traffic forever. And here it is. PE2 wants to setup 800 Mbps RSVP signaled LSP to PE3. From PE2 to PE3, physically two paths are available.

This is Bin Packing Problem. If PE2 LSP request would come first, it could use only top path and when the PE1 request comes, PE1 LSP could be setup over the bottom path. But there is no coordination between the PE 1 and PE2. They don’t talk each other and say, hey here is my traffic demand, you should use the top path and I will use the bottom path, so on and so forth.

PE1 request came first, it’s demand is satisfied over the IGP shortest path and Red LSP is signaled. If order would be different, at least in this topology, we wouldn’t have an issue.

This request (Bandwidth in this case) ordering problem is called ‘ race condition ‘ problem. Whoever comes first, He gets the bandwidth baby ! How Bin Packing Problem can be avoided ? Do we have a solution for this ? Fortunately yes. First solution is LSP Priority. By giving a higher priority to the PE2 LSP, when the request comes, PE1 LSP is moved to the bottom path.

Second one is changing the computation mechanism. Note: Below part will be a bit more technical, promised to keep it as simple, but might be harder, let’s try. Distributed path computation with MPLS is done with CSPF (Constrained Based Shortest Path First Algorithm). Each router knows the traffic demand of itself and it attacks to the available bandwidth.

They don’t know the traffic demand of the other routers. But don’t confuse traffic demand with network topology. They of course know the each other topology, because every router in an Area or Level (OSPF and IS-IS respectively) has the same LSDB (Link State Database) and TED (Traffic Engineering Database, TED is only when Traffic Engineering is enabled) Since they don’t know each other traffic demands, if there would be a centralized node which talk with these routers and learn the traffic demands and the network topology, it could calculate the path on behalf of all the routers and tell to the routers which path they should use for their LSPs.

I think some of you are saying that it is SDN approach and that’s correct. In case of MPLS networks, PCE (Path Computation Element) with some extensions, exactly does that. By having centralized traffic demand view, we would avoid Bin Packing Problem, thus would be able to signal required LSP, timely and over an optimal paths. End result would be as below for the above topology. 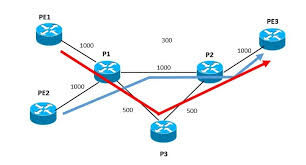 Figure – 2 Optimal Bin Packing – No Problem for the LSP Demands